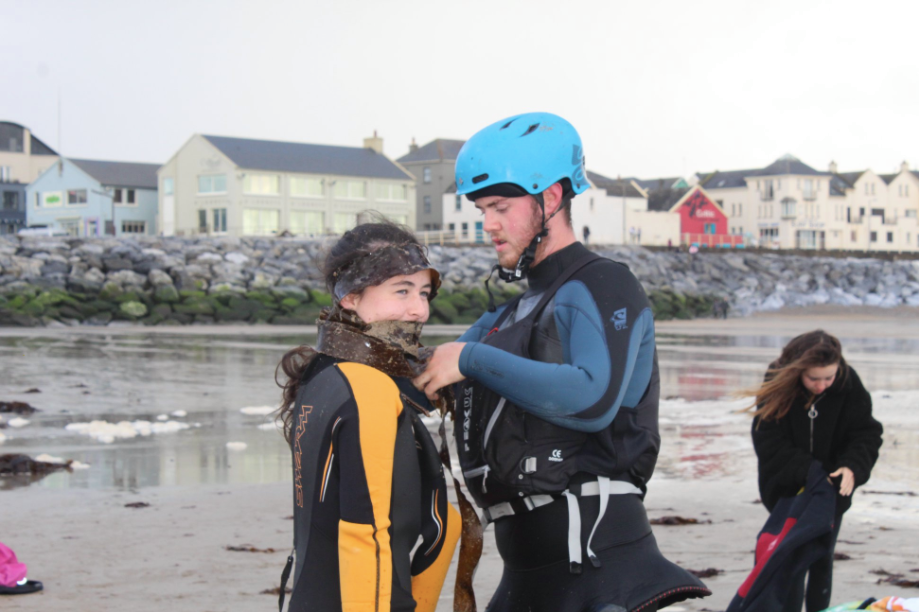 In mid-October the club loads a fifty-seater bus and makes an unforgettable journey to any one of a variety of locations around the country. The trip is aimed at giving new members a taste of what the Canoe Club really is and incorporates over 50 hours of kayaking and social madness. The weekend starts as soon as lectures finish on a Friday, with members meeting on campus throughout the afternoon. The bus leaves, once those unlucky enough to have labs on a Friday are done, and the party gets into full swing as we journey out of Dublin, move into a hostel and sample the local nightlife.

Included in the price of the weekend are: use of the bus for the weekend, two kayaking trips, two breakfasts, one dinner, trips run by qualified instructors and accommodation for both nights.

Freshers' Weekend: paddle and party all weekend long, see Saturday night fancy dress Canoe Club style for the first time, meet the oldies, get hooked on the craic and mark the next trip in your diary. 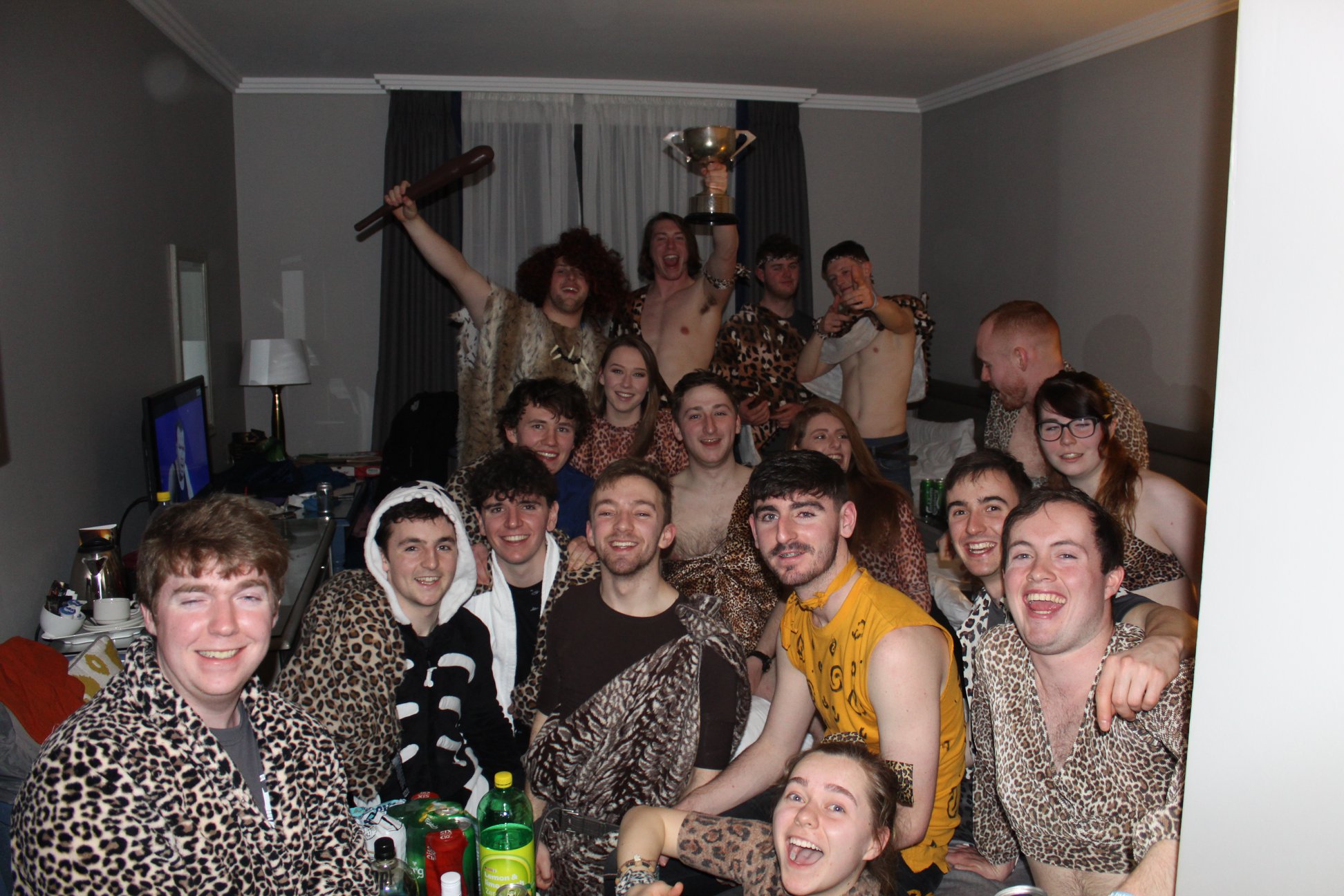 In mid-November the club embarks on another invigorating adventure! Leaving the comfort zone of Dublin, both freshers and experienced paddlers are sure of a challenge over the weekend. The kayaking portion is unique throughout the year as the club tries its hand at kayak-surfing on a beach usually on the doorstep of our chosen hostel. These full days are followed by two brilliant nights out; namely Saturday night, where each person is paired up with another and cable-tied together for the rest of the night. The pair that stay tied together the longest are crowned the winners - by far the most important competition of the year. Also, we may collect a few Dublin University Kayak Club members (DUKC); Trinity’s kayak club. Therefore, a bit of competition will naturally be thrown in over the weekend, to show who’s the best club: who gets there first, who has the most fun partying, who surfs the biggest wave, whose freshers paddle the most, whose freshers swim the most, whose committee breaks down first, who has the greater number of attending oldies, who brings the most guitars, who sings for the longest, whose bus is the biggest, whose trailer is the shiniest, whose helmets are the roundest and so on and so forth. NOTE: DUKC haven't actually attended the past couple years - guess they're intimidated.

Included in the price of the weekend are: use of the bus for the weekend, two kayaking trips (weather/surf permitting), two breakfasts, one dinner, trips run by qualified instructors and accommodation for both nights. 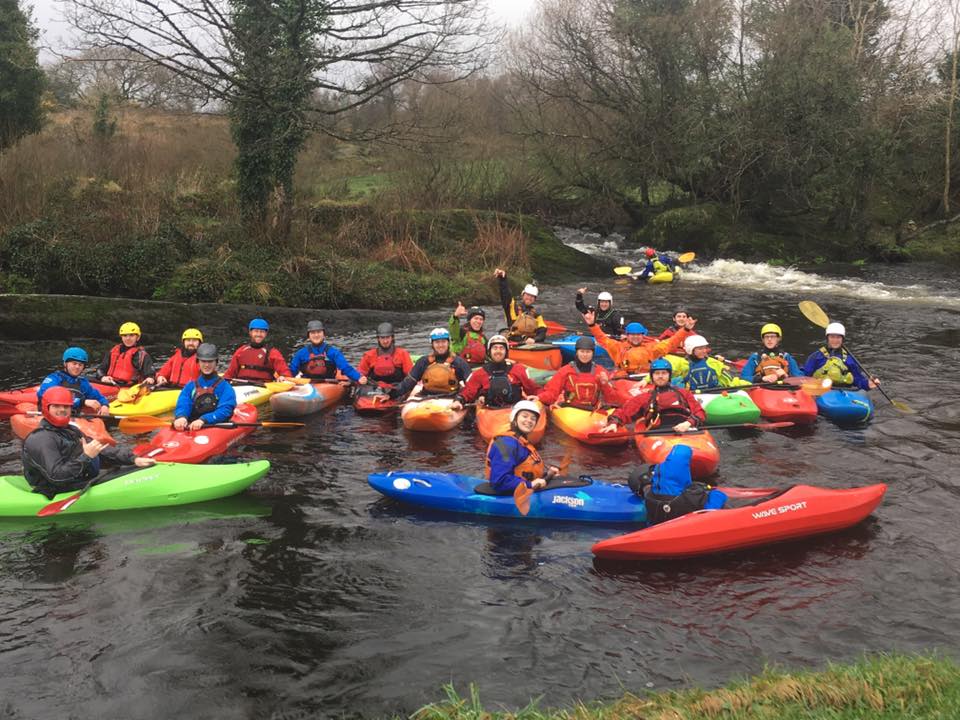 Kayakers from around the country gather in Kerry at New Year's every year, and UCD Canoe Club are in the thick of it; occupying two club houses, as many as five private houses, with trailers in tow and staying all week long. Paddling in Kerry is often a fresher's first taste of real rapids and many have been known to request running as many rapids as possible during the week (Again Syndrome). If the weather is dry the club takes advantage of our fantastic location and runs kayak surfing expeditions both nearby and in the breathtakingly beautiful Finian's Bay an hour's drive away. Each night has a party, ranging from a "quiet" club house party to New Years' Eve celebrations which see dozens and dozens of paddlers from around the country gathered in a local pub for an amazing night. UCD holds a pub quiz each year, whose winners receive their choice of paddling or partying gear and of course a healthy amount of bragging rights.

Included in the price: accommodation, breakfast and dinner for as many nights requested during the week and trips run by qualified instructors. The club does not provide a bus to Kerry, giving the perfect opportunity to make better friends with club members who drive and negotiate lifts down (but don't forget to chip in for fuel costs, you might not get a lift back otherwise!).

Kerry: live in a Canoe Club village for a week, paddle as much as possible, socialise every night, compete for prizes in the quiz, meet paddlers from other colleges, see the super-oldies, make a note on every calendar from now on that come New Year's, this is the place to be. 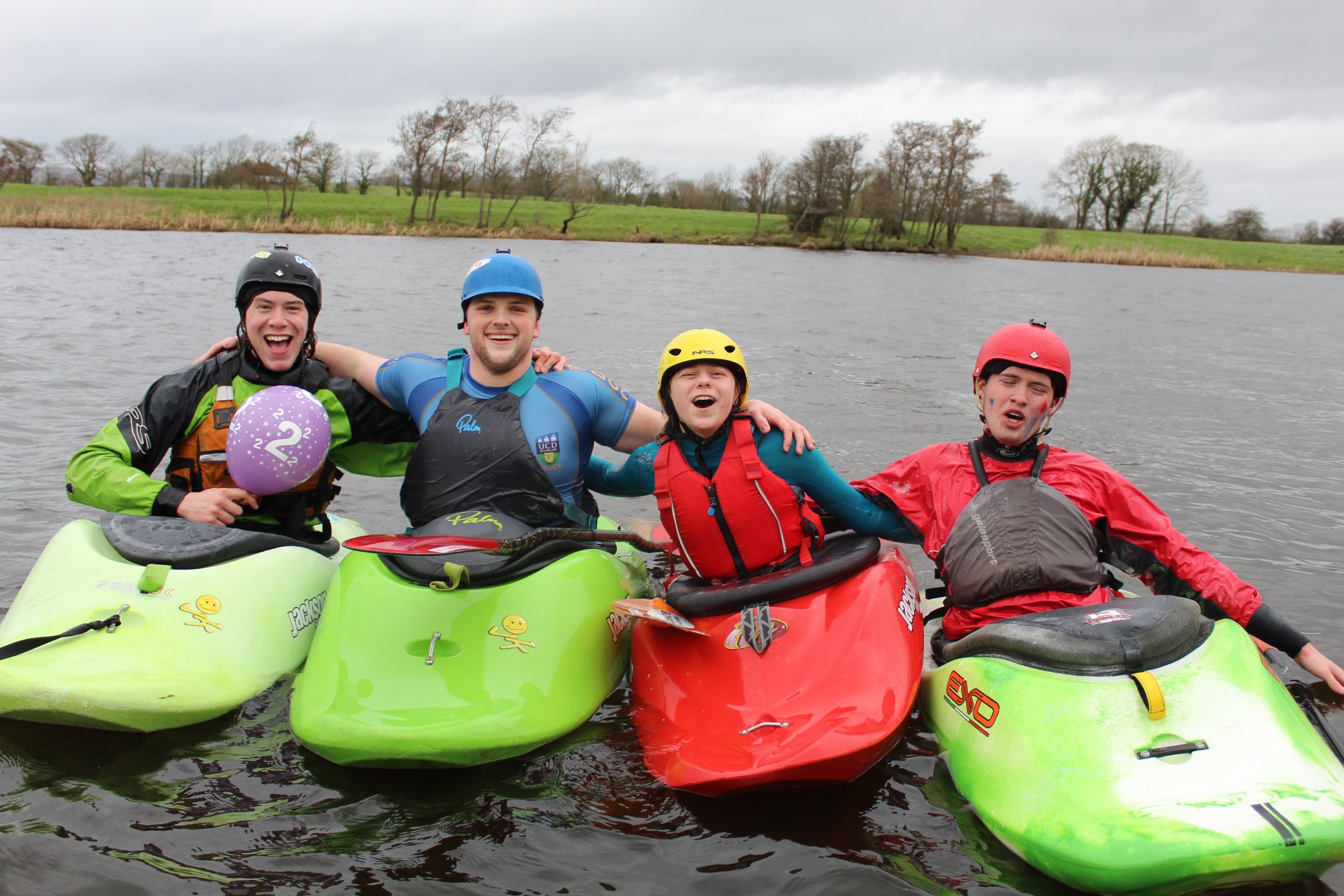 Once a year college canoe and kayaking clubs from around the country send representatives to participate in the prestigious Kayaking Intervarsities Competition. UCD enters teams or individual competitors in all four events; canoe polo, white water, long distance and freestyle. In keeping with the spirit of the competition both genders must be represented on each team.

Colleges around Ireland take turns to host Varsities, a decision announced at the end of the prize-giving ceremony each year. As the venues for each event change entirely from year to year, so do the some of the rules (and indeed events) meaning no two competitions are quite the same.

The canoe polo tournament takes place on the Friday of the weekend, requiring the team to travel to the venue ahead of the rest of the club. The team is open to all club members with sufficient basic paddling ability, but prioritises those who have taken part in canoe polo training and competitions during the year (eg the Dublin Canoe Polo League). If you would like to get involved in polo (the only ball sport offered by the club) do not hesitate to let us know in good time, the club is always happy to see new polo players!

The white water competition takes the form of a time trial with teams of three from each university paddling a suitably challenging section of whitewater (grade 3+/4). Each paddler must complete the course and a college's finishing time is recorded once the last team member finishes. To decide first second and third place one paddler is selected from each of the colleges in the lead to compete in a boatercoss along the same section. Due to the more challenging nature of the course, the team is picked from more experienced members of the club.

A race for all the canoe club family! Long distance is a marathon held on flat water, which gives the vast majority of new members a chance to represent UCD in their first year in the club. There is no limit to the number of competitors a college can enter in the long distance race, the more the merrier!

This category provides the annual outing for the clubs old-school, long, plastic boats, contrasting with the brand new members who paddle them.

Too fast for GP but can't stay upright in a K1? Then HP is the place for you! Paddle a long, narrow boat for twice the distance and twice the glory.

The club owns one topo duo boat which is entered in this category each year. Two paddlers working together can take turns being the engine, steering and waving at the spectators.

Take out the club's canadian canoe and compete in one of the smallest categories of the competition. Dress to match and sing all the way for best results.

See international competition standard marathon boats (long, sharp and shiny) paddled by real athletes. Watch them go by and try not to get skewered.

All the prowess of K1, but double the athletes, amazing to watch; the level of skill involved in paddling with such exact technique in perfect unison is very impressive.

Teams of four representing each college are allotted a time to pull of as many tricks as possible. The rules vary a little each year according to the host college's chosen feature, but generally the best tricks made by each member of each team are added to give the score awarded to their college. Given the vast range of skill levels present at any given year's event, points are awarded for waving at the judges, smiling and entertaining the crowd, as well as technically correct executions of recognised moves.